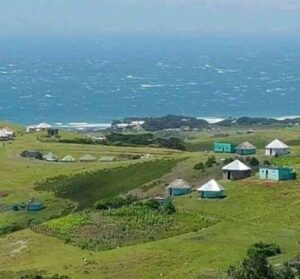 Mendwane is a coastal village situated in Dwesa-Cwebe, Eastern Cape. It is one of 7 villages surrounding the Dwesa-Cwebe Nature Reserve on the Wild Coast.

The people of Mendwane have historically lived off the land and sea through agricultural and small-scale fishing (SSF) activities. However, with the establishment of the Marine Protected Area (MPA), Dwesa-Cwebe Nature Reserve, Mendwane became one of many communities that have experienced victimisation as a result of MPA’s in South Africa.

Traditional small-scale fishers in this area have been systematically prevented from exercising their customary rights to marine resources due to decades of removals and regulations. This was further escalated with the declaration of the Dwesa-Cwebe MPA as a ‘no-take’ zone in 2001. There was no consultation or participation of local fishing communities in the establishment of the MPA and their customary system of marine governance were completely ignored.

In 2016,  the uMthatha High Court ruled that the establishment of  MPAs (previously done in terms of the Marine Living Resources Act) did not extinguish the exercise of the customary rights of access of coastal communities to their marine resources.

Despite this judgment, local fishers continue to be arrested and criminalised for “illegally” fishing in an MPA, an act which violates the fishers’ customary, human and constitutional rights.

Earlier this year, Masifundise attended a community meeting hosted by the Department of Forestry, Fisheries and Environment (DFFE). This meeting came as a result of continued harassment and violence against small-scale fishers in Mendwane.

The meeting sought to bring together the community of Mendwane as well as various stakeholders to discuss the much-needed protection of small-scale fishers while securing their livelihoods. It provided a moment for the community to advocate for their right to safety as well as their customary right to fish.