“Please tell us what ‘co-operative’ means to you, DAFF?” Ask the KwaZulu Natal Coastal Links leaders and fishing communities at the KZN Coastal Links Provincial Workshop 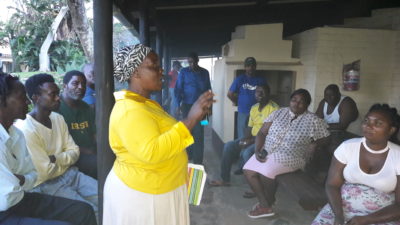 Coastal Links KZN leaders and fishers are in shock. They have realised that DAFF’s understanding of the words ‘co-operative’, ‘co-management’ and ‘human rights’ is not the same as theirs. Fishing communities in this province have been waiting for the implementation of the Policy for Small-scale Fisheries since 2012.  They have no interim relief measure and only a small number of the fishers have previously had subsistence permits, and all of these expired over a year ago.   They say that the process of registration, verification and appeal in this province was haphazard and chaotic. At the Imbizo in Sokhulu, held specifically for small-scale fishers in September 2017, Minister Zokwana promised them that the appeals process would soon be finalised and they would be able to form cooperatives and their small-scale fishing rights will be recognised. The fisher leaders pleaded with the Minister that their customary rights should be respected and submitted a memorandum to him and DAFF to ensure that this plea be recorded. However, this week when 22 leaders gathered in Mtwalume for their Provincial Workshop hosted by Masifundise reported that their worst fears have been realised.  The problems that they reported to the Portfolio Committee on Agriculture, Fisheries and Forestry in 2016 and to Deputy Minister Beki Cele about the unfair registration and verification process are now very visible in the final list of successful SSF fishers that DAFF have announced in the past two weeks.  But even more shocking to them is the fact that DAFF continues to impose a top-down, one size fits all approach to SSF implementation and has its own interpretation of what ‘to co-operate’ and develop a ‘cooperative’ means.  And this version does not include their customary rights. The process that DAFF is following to announce the final lists and conduct training for the establishment of cooperatives is flawed.  Daff has unilaterally changed the Constitution template that it intends using for the training and they are threatening to exclude any fisher who does not attend the training from being a member of the cooperative.

Who gave DAFF these powers ask the KZN leaders?

The KZN Coastal Links leaders spent two days in their meeting listening to reports from each branch and recalling the processes in the province. In 2016 when the process of registration and verification for the SSF sector began in KZN Coastal Links leaders reported that the service providers managing this process were not giving them a fair and reasonable chance to participate in this process.   They reported to DAFF and to the Port Folio Committee in Parliament that they were being discriminated against unfairly.  For example, in the locality of Esihlonyaneni the service providers kept changing the date for registration and in the end the fishers were given less than 24 hours notice for registration.  This is a large locality with over 200 fishers and it was very difficult to inform all the fishers.   In the majority of areas fishers report that they did not get adequate notice of registration. In most areas the service providers did not advertise the meetings in local newspapers, nor did they distribute notices or announce the meetings with a loud hailer. In many rural areas they simply put a single pamphlet at the tribal Authority office. Then when the lists of successful applicants was released many bone fide fishers were not successful.  Even fishers who had previously held subsistence permits from the authorities and still had these permits as proof that they had been fishing for over ten years were told that they were not fishers.  In St Lucia for example, only two (2) out of 500 fishers were successful initially. The appeal process was also chaotic and in some areas insufficient notice of the meeting where appeals would be managed was provided.  Several Coastal Links leaders began to suspect that they were being prejudiced by the service provider, Amagagazi, as many of the people working for the service provider had previously worked as officials for the conservation and compliance agency, Ezemvelo KZN Wildlife. In some areas like St Lucia the appeals process did help and the number of successful fishers shot up from 2 to 58 fishers whereas in other areas many fishers did not know about the appeals or were so disheartened by being told that they were not a fisher that they didn’t appeal. 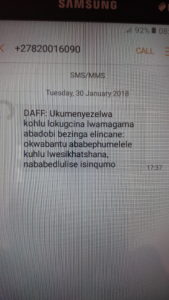 The Coastal Links leaders meeting this week in Mtwalume report now that the process that DAFF is following to announce who is successful and how the training and setting up of cooperatives will happen is also chaotic.  Last week fishers in the area of Nkundusi received an sms from DAFF to say that a meeting would be held but there was no time or date on the sms. When some fishers found out from DAFF and attended this meeting they were told that a training meeting will be held in March.  They were then told that if they do not attend this training meeting they will be struck off the list and excluded from the cooperative.  This means they will lose their fishing right.  But not all the fishers even knew about this meeting so how will they know about that meeting ask the leaders?  When they asked the DAFF officials for the list of successful fishers DAFF refused to provide this list in nearly all of the areas.   The list of successful applicants has not been published publically by DAFF and there have been no notices provided about when the training events will take place.  In some areas DAFF officials notify fishers via smses however several fishers say not all fishers receive the smses.   And if the sms does not inform you when the meeting will take place this does not help you.

In addition to the unfair process of informing fishers about the lists and the training several fishers reported that unsuccessful fishers have not received written notice as to why they were unsuccessful. In at least two areas the number of successful fishers is less than 20.  DAFF officials have now told the leaders in these areas that they cannot form a cooperative and will not get their SSF community based right but instead they must join a neighbouring SSF community.  This idea is so strange to them they cannot believe that this is true.   How can we join another community when we are our own community they ask?  They have their own traditional authority and customary system and now DAFF wants them to go and join another community that has its own Induna.  But what happens to their communities’ customary fishing rights they ask?   And  in the case of x community  in Mabibi why must they join a fishing community that is more than 20 kilometres away and far away from their traditional fishing and harvesting areas?  How will they ‘co-operate’ and ‘co-manage’ their own resources in this situation?  They feel that this is a violation of their communities’ customary fishing right that they have held for generations.  But perhaps the biggest shock came to the fisher leaders when they saw the Constitution that DAFF has distributed to the fishers in the Northern Cape at the Cooperative Training event.  This Constitution gives DAFF a great deal of power over the SSF fishing cooperatives and takes away their right to develop their own Constitution based on their local context.  Further, it imposes conditions for membership and the termination of membership if someone dies onto them that violate their customary rights.

The leaders studied the DAFF Constitution and discussed its implications in depth.  They considered how it will 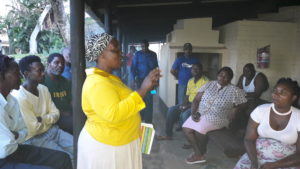 shape their cooperatives and expressed confusion as to why DAFF was imposing this one size fits all on them and not allowing them to sit together and develop their own rules, bottom up, in a participatory way.  This is what they had thought a cooperative involved: cooperating with one another about how to manage their resources, how to market their resources and how to benefit from them, ensure food sovereignty and livelihoods.  They expressed dismay that Clause 14 states that if a member dies the family of the member ‘may’ benefit from the cooperative.  They feel this is a very weak and insecure provision that undermines the rights of fishers.   They asked what would happen to a customary right that has been passed down for over 500 years if the family cannot inherit this right?  They also asked why commercial fishing rights holders and companies can leave their rights to who ever they want to but DAFF was dictating to them what they could do.

The DAFF Constitution states that the fishers may not change the Constitution without first informing DAFF of their reasons and that any changes that they propose must be in line with the “ideology of the SSF Policy”.  The Coastal Links leaders said they do not understand how DAFF can say this when the DAFF Constitution itself violates their Constitutional rights and the Policy for SSF.   The KZN Coastal Links Provincial Meeting took a unanimous resolution to reject this version of the DAFF Cooperative Constitution and to write to the Acting DDG and to the Director of Small-scale Fisheries informing them of this.  They also took the decision to seek legal advice from Legal Resources Centre about both the process that DAFF was following for implementation, the problems that they have experienced due to the service provider, Amagagazi and now the content of the Cooperative Constitution proposed by DAFF that does not align with the Cooperative Act of 2005 or the Constitution.

The leaders were very frustrated that so much of their time was taken up by these problems.  They had hoped to use this meeting to deepen their discussions about co-management and to share experiences from their community profiles which they are using to mobilise their branches and to engage local municipalities in creating livelihood opportunities along the value chain.  They enjoyed meeting the Mtwalume Profile Task Team, which comprises a group of dynamic youth and elders who have begun documenting the history of their fishing community in Mtwalume. The process of interviewing the elders and hosting community meetings on the history of their ancestors’ use of marine resources has revealed many wonderful stories and a great deal of rich information.  The profile team took questions from the leaders and engaged in discussion about how they feel the community profile process will enable them to participate effectively in co-management of their marine resources in future.