“We are the oceans, we are the waters, we are the people!”- 7th General Assembly of the World Forum of Fisher Peoples asserts small-scale fishers human rights and food sovereignty

From the 15th to the 21st of November 2017, members of the World Forum of Fisher People (WFFP), allies from social movements and support organisations gathered in Delhi for the WFFP 7th General Assembly.

WFFP was founded in Delhi on the 21st November 1997, thus the time and location of the General Assembly carried have been particularly significant, marking the 20th anniversary of the foundation of WFFP. 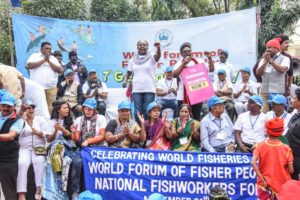 During the 6 days of the General Assembly, delegates discussed the challenges and struggle experienced by fisherfolks all over the world, namely climate change, lack of recognition and appropriate governance at local, national and global level, violation of fishers’ human rights and ocean grabbing.

The platform of the General Assembly has also been used to build solidarity among fisherfolks living in different context, yet experiencing the same issues and challenges, strengthen the alliance with other small-scale food producers and to discuss and strategize around real solutions such as achieving Food Sovereignty and the rightful implementation of the International Small-Scale Fisheries Guidelines.

The General Assembly culminated with a rally in celebration of World Fisheries Day on 21st November 2017 and the presentation of the WFFP Delhi Declaration:

We, the World Forum of Fisher Peoples (WFFP), along with delegates from numerous allied organizations from around the world – including the World Forum of Fish Harvesters and Fish Workers (WFF) and La Via Campesina (LVC) – have gathered from 15 to 21 November in Delhi, India for the WFFP’s 7th General Assembly. Despite the reprehensible rejection of visas for many of our comrades and colleagues, we are back here 20 years after our founding with victories, and we are motivated to continue the struggle in the support of small-scale fishers. 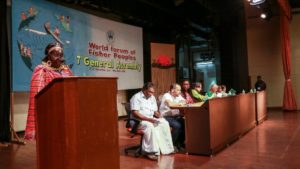 We unanimously declare the sovereignty of the traditional, natural resource-based communities over the land, water-bodies and oceans of the world. At a time when, capitalist forces across the world have taken control over our elected governments, exploiting our natural resources and those opposing it; community leaders, journalists and activists are silenced through state-driven and state-sanctioned violent repression. In addition, the impacts of climate change on our land and water bodies are rendering our people migrants and refugees in an already precarious labour market.

We are witnessing collective struggles from across the world, by communities who are being dispossessed. Women are leading battles to resist efforts to wipe out our histories and homogenise our identity and culture. We are struggling against neoliberal forces and the historical consequences of colonialism and post-colonialism. The grabbing of our resources is nothing new. Yet, ocean, water and land grabbing today is taking many new forms and is justified in new ways. We find ourselves in conflict with extractive industries, the expansion of big infrastructure projects, as well as capital-intensive fisheries, aquaculture and agriculture. All of these are known to be worsening climate change, as well as severely polluting our environment.

We highlight the impact that climate change has on fishing communities, as the first places affected by sea level rise, floods, coastal storms, increasing water temperatures, loss of aquatic biodiversity, and forced displacement. We understand the dire need to develop effective strategies to cope with these worsening threats. We are resisting the transformation of our territories into sites for top-down conservation, which results in similar grabbing processes by impinging on our access to and control of the resources we depend on for our livelihoods. We condemn the application of false mitigation solutions, such as Marine Protected Areas (MPAs) and blue carbon initiatives, that often lead to land, water and ocean grabbing. These end up accommodating rather than challenging the actual drivers of climate change and environmental destruction. The impacts of resource-grabbing are aggravated by class, gender, caste, and other divides. 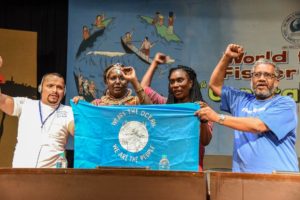 We oppose the justification of resource grabbing framed as ‘sustainable development’, ‘blue growth’ or the ‘beautification’ of our ocean, land and water territories. Under the guise of these goals, the state has become a facilitator of resource grabbing. International trade and investment agreements, together with the policies of international financial institutions, have shrunken the state’s ability to support the majority of its citizens. Additionally, the turn towards ‘multistakeholderism’ has further diluted the responsibilities of states, by glossing over the inherent power imbalances in neoliberal society. Additionally, national elites across the Global South should not be taken off the hook for transforming the role of the state through their alliance with global and national capital and their complacency in resource grabbing. By co-opting the language and certain community demands, such as rights to fishing being converted into private property rights, state and non-state actors are trying to sanitise dispossession – leaving behind a dead sea and broken people.

We must regain control over and access to our commons and natural resources. A human rights based approach is at the core of all of our actions and daily activities, as a crucial way to protect our social, political, economic and cultural rights.

We believe that gender equity and women’s rights play a crucial role not only in democratising our communities, but also in how we engage in fish harvesting, processing and marketing. Women must have more space to participate in decision-making processes, while also being equally embedded in leadership positions in all of our member organizations. Women fishers are already advocating for, and taking important and powerful steps, toward achieving gender equity in their communities, and in fisheries sectors globally.

We recognise the importance of having strong regulations and legal frameworks that value fishers’ lives, protect fishing communities from land, water and ocean grabbing, and secure their livelihoods, control over, and access to resources. We strive to establish stronger relationships with local authorities in order to amplify the demands of fishers’ in policies pertaining to their lives and livelihoods. The Small-Scale Fisheries Guidelines (SSF Guidelines) offers an important framework for developing these, and serves as a valuable tool for understanding how our local and national policies can feed into and inform international legislation. We will also continue to work toward finding ways to implement the SSF Guidelines in practice in our communities. 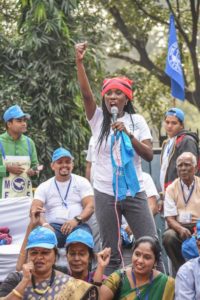 We have concrete solutions that come from our traditional knowledge and follow the principles of food sovereignty and agroecology. This means fishers taking back control of the resources we depend on for our livelihoods and food, and allows us to autonomously decide what and how we harvest fish, who we sell it to, and what we eat. The connections to these principles are clear in both inland and marine fisheries, where our livelihoods and the ways we provide food for our families and communties, co-exists with and respects the natural environment. Our existing agroecological practices are a powerful vehicle for achieving food sovereignty.

We clearly see the many commonalities between the issues faced by fishing communities, peasant communities, and indigenous communities – especially among women and youth – who are all food producers dependent on natural resources for their lives and livelihoods. We share many of the same visions for alternative ways forward in fighting for our human rights. This is why it is crucial for all of us to build stronger alliances between our communities and our movements at the local, national and international levels. These alliances allow us to connect with and support each other, share our experiences and struggles, and work toward implementing a common alternative vision. The wider our network reaches, and the more allies we have, the louder our voices will be: “We are the oceans, we are the waters, we are the people!”