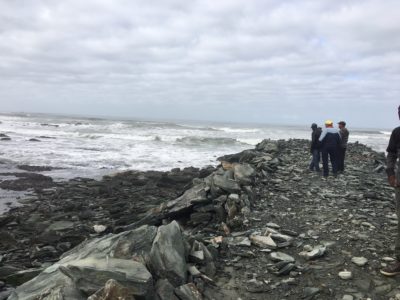 Recently, the South African government has been actively rolling out its Small-scale Fishing Policy across four coastal provinces – the Eastern Cape, Western Cape, Kwa-Zulu Natal, and the Northern Cape, But, for small-scale fishers to benefit from livelihood opportunities offered by policy means more than having a verified legal right to fish. It means that small-scale fishers need to access their traditional fishing areas and, the existence of a sustainable supply of local marine resources. Both are currently under serious threat along the coastline of the Northern Cape.

Fishers from Coastal Links branches in Port Nolloth and Hondeklip Baai first raised their concerns about these threats last year at a workshop facilitated by Masifundise with the Northern Cape Provincial Executive Committee. During a mapping exercise they drew a map which plotted their traditional fishing areas and mining concessions along the coastline – from Alexander Bay in the north to the Groen Rivier in the south. The picture that emerged was devastating. Small-scale fishers currently only have access to less than 5% of their traditional fishing areas along the Northern Cape coastline due to existing and past mining concessions under the control of three mining companies that operate in the area – Alexcor, De Beers, and Transhex. 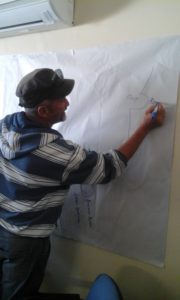 The picture gets much worse when the fishers shared their concerns about a disturbing practice being undertaken by mining companies along the coastline – the construction of Coffer Dams.  A Coffer Dam is a man-made dam built by the mining companies that consist of four sea walls that protrude into the ocean and constructed out of either quarried materials or concrete. Once constructed the Coffer Dam is drained, along with any marine life and ecology that exists, to enable the mining company to bring in heavy drilling machinery to extract the diamonds that lie below. Once this is done, the area becomes a dead zone for future marine life, requiring years of rehabilitation. In other words, the practice is destroying the marine ecology of the coastline and along with it, the present and future livelihoods of small-scale fishers.

Over the weekend of 17 February 2018, a group of Coastal Links members from Port Nolloth and Hondeklip Baai, accompanied by Masifundise, visited a Coffer Dam under construction at Alexander Bay to get a first-hand look and feel on how the Coffer Dams impact the local marine environment and threaten the livelihoods of fishers along the coast. The group was taken into the area by small-scale marine divers who share a common concern for the environmental sustainability of the coastline and their own livelihoods. The fishers were shocked at what they saw – large sea walls constructed out of quarried rock and dumped into the ocean by Alexcor in preparation for future diamond excavation. According to many active environmentalists and local marine divers, these Coffer Dams are being built by the mines without them undertaking legally required environmental impact assessments in contravention of existing South African environmental legislation and policy. 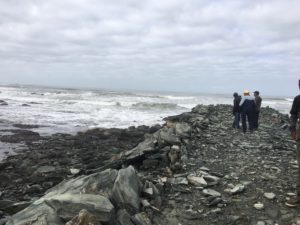 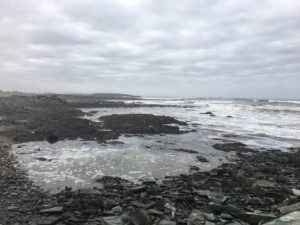 A right to fish under the Small-scale Fishing Policy becomes a meaningless right in a Northern Cape context in which access to fisher’s traditional fishing areas is limited to less than 5% of the coastline, and the existing mining practices, including Coffer Dams, threaten the current and longer-term sustainability of South Africa’s marine resources along its coastline. Because of this, small-scale fishers from Port Nolloth  and Hondeklip Baai are saying “enough is enough” and are linking up with local small-scale marine divers, environmental activists, and community-based organisations across the Northern Cape to fight against Coffer Dams and their right to food sovereignty, including equitable access to the province’s marine resources and more just environmental policies and practices along the coastline.